Join us on a leisurely float amongst the cottonwoods, in silence and awe of the diversity of wildlife.  You will have space to relax and find your connection with the river as you guide your canoe down the St. Vrain east of Longmont. 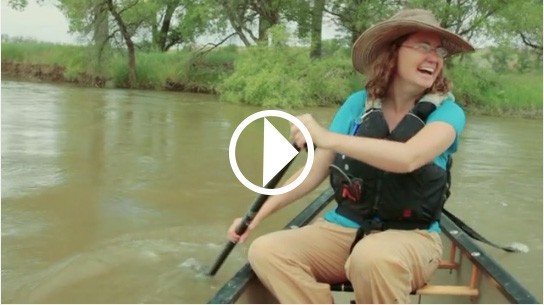 “May we learn to walk
Upon the earth
With all their confidence
And clear-eyed stillness
So that our minds
Might be baptized
In the name of the wind
And light and the rain.”

Just east of Longmont, there is a hidden wild place among the willows and cottonwoods on the St. Vrain river.  Here, you will join the wood ducks, bald eagles, and herons on a journey down a river that feels much wilder than the farmlands among which it flows.  You will have a moment to slow down, your paddle slipping into the water silently as you listen to a cacophony of birds. You might see a mink, deer, or coyote watching you from the shores. You might see bald eagles and pelicans soaring overhead, as you picnic along the banks and float down the river, feet on the surface of the water, allowing the river’s gentle current to take you downstream, enveloping you in its cool escape from the summer’s heat.

This is a river journey like no other. It is slow. Contemplative. Beautiful.  You will have enough excitement to keep you on your toes, with lots of laughter, play, and time to skip stones and swim in the current.  This trip is perfect for all ages and abilities, and for all of us who love the silence and beauty of the wild places in our beautiful state.

Throughout your canoe day trip on the Meanders stretch you will see cliff swallow colonies, red-tailed hawk nests, and american mink. Choose the Kurtz Ranch canoe day trip and you will see a bald eagle’s nest and a great blue heron rookery. On either trip, you will become more familiar with the following species as well:

Human and Cultural History of The St. Vrain

Humans have inhabited Colorado’s Front Range for thousands of years. Actually, one of the oldest archaeological sites in Colorado is in Weld County, near the town of Milliken, which the St. Vrain flows past. Stone Clovis points and mammoth bones between 11,000 and 12,000 years old were found here in the 1930’s, providing some of the earliest evidence of mammoth hunting in North America.

More recently, the Front Range has been a crossroads for many tribes, including the Ute people, the Apache, Comanche, Cheyenne, and Arapaho.

The St. Vrain River is named for Ceran St. Vrain, a fur trader of French descent who helped establish the Old Fort St. Vrain around 1837. The fort was situated on the east side of the South Platte River in Platteville, just north of the St. Vrain Creek, and functioned as a key trade center and stopover for wayfarers on the historic Santa Fe Trail. Trade with and between the Cheyenne, Arapaho, Ute, Sioux, and Shoshone peoples was a key activity at the fort. Buffalo hides traded from Plains peoples were one of the most sought-after items.

What should we bring?

For All Guided Canoe Trips:

We will provide all of your river gear (boat, life jacket, & paddle) will be provided. We also provide dry bags for your belongings.

Where do we meet for a St. Vrain Day Canoe Trip

The meeting spot where our canoeing river adventures begin is right outside the Starbucks in Firestone. Participants customarily park in the plaza parking lot and meet us on the Starbucks patio. After our rendezvous, we will car-pool a short distance to our put-in site.

Travel Distances to the Starbucks in Firestone:

From Ft. Collins and points north: Follow I-25 South to CO-119 in Weld County. Take exit 240 from I-25 S. Go east on 119 and take a left on the I-25 Frontage Road. The plaza containing the Starbucks will be just after this on your left.

From Longmont or Boulder: Take CO-119 (Diagonal Highway) northeast through Longmont to Firestone. Go under I-25 and take a left on the I-25 Frontage Road. The plaza containing the Starbucks will be just after this on your left.

How many people can go per canoe trip?

Up to 27. We try to maintain a maximum ratio of 1 guide for every 6 participants.  Usually, our ratio is closer to 1:4.

If you have a larger group, contact me and I will do my best to accommodate you!

Is it appropriate to tip?

Yes! If you appreciated your guides and would like to offer a tip, we would welcome your generosity. Tips are split equally between the guides and the shuttle driver.

Should we expect any whitewater on our canoe trip? What hazards should I expect?

These are not whitewater trips! Our trips are class 1 float trips.  At high water in the spring, we may experience some class 1 riffles, but they are minor.

The major hazards we have on the St. Vrain are trees that have fallen into the river. We will either portage around them or paddle on by. Some sections may have fences going across the river, but we can generally duck underneath them.

Do I need experience?

No.  Your guides will teach you everything you need to know!  Be prepared for a learning curve.  It may be a little difficult at first, but you will get the hang of it quickly.

Will I see any wildlife?

Yes!  Most likely, we will see bald eagles, hawks, blue herons, and great horned owls.  We may also see snapping turtles, mink, beavers, raccoons, fox, coyote, and maybe even the elusive bobcat.  There is no danger of aggression- the wildlife we will see will ignore us and go about their business. It’s an amazing experience to see such a multitude of species so close to home!

How do I get back to my car?

We will carpool from the Starbucks to the starting location. At the end of the trip, carpools will return to the Starbucks where you parked your cars.

Do you do custom trips?

Yes!  For you and groups of up to 27, there are many more sections of the river to explore.  We will cater to all of your needs and desires.

Custom trips can be on our usual sections of the St. Vrain or, if you have a small group or are solo, we can explore hundreds of miles of river along the Front Range from Denver to Fort Collins. Just contact us to make arrangements.

Where is the river?

All of our day trips occur on sections of the St. Vrain River east of I-25 near Firestone, CO.  We have 27 miles of river to choose from!

Custom day trips can be scheduled on hundreds of miles of river from Denver to Fort Collins! We float sections of the St. Vrain, Boulder Creek, the South Platte, the Big Thompson, and the Cache la Poudre rivers.

Am I going to get wet?

Your feet will definitely get wet and muddy.  There is always a possibility of getting totally wet if your canoe happens to flip over.  The river is generally quite shallow, so you will likely be able to stand up right away- flipping over isn’t a big deal! We will help you out if this happens- you are in good hands!

In fact, depending on the conditions, there may also be opportunities to jump in the water and float down on purpose- Our head guide Lauren tries to get wet as often as she can, because it’s fun!

May I bring my kids?

Yes as long as they are 5 or older.  An adult chaperone is required for youth ages 5-15 years old.

Will I have a life jacket?

Yes.  We will provide them for everyone, and you will wear one at all times.

Do I need to know how to swim?

No.  However, you should feel comfortable with water.  You will be wearing a life jacket at all times and if you are nervous, you can ride with the guides.

Our guides are experienced taking people of all ages including many in their 70s and even 80s.  As long as you are mobile enough to walk from the car to the canoe and get into the boat, we can take you!

Where do I go if I want to canoe without a guide?

Many of the sections we float have put-ins and take-outs that are located on private land. It is not advised to access these areas without permission of the landowners. Additionally, hazards can be found on many sections of river that may require special skill or knowledge to navigate. As stewards of these rivers and their communities, we want to help ensure that recreation is safe. If you would like to learn where to safely go out with friends, please feel free to contact us.